Popping the question is an art form that needs to be planned and executed flawlessly. Proposing to a girlfriend is always one of the most stressful and exciting parts of a relationship. This question marks the transition of a relationship to a phase of happily-ever-after or a complete breakup. There aren’t many couples who make it out of this situation in another fashion. Even if the man and woman are completely confident in their love for one another, proposing is still a nail-biting occasion. It’s normal to be nervous and a little queasy. This means that the person asking the question cares for their significant other and wants a certain answer. It’s perfectly normal for an individual to feel nervous right before popping the ultimate question. Fortunately, there is a blueprint to a proper proposal that has been evolving over time. Some people have chosen to propose in public with hundreds of witnesses. Others are performed through homemade movies or YouTube videos. There are more intimate proposals that happen at the home or apartment of a couple with no flashing lights or strangers watching. A classic restaurant proposal is also a popular option. There are even some couples that begin their fairytale with a proposal in front of Cinderella’s Castle in Disneyland. This picturesque setting has been a favorite of romantic couples for decades. The castle and general atmosphere of Disneyland are symbolic of the fairytale relationship that the couple will experience throughout the course of their marriage. 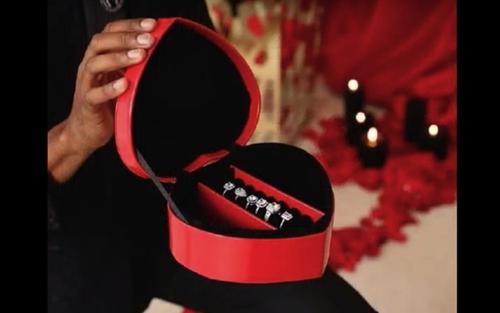 There’s even a story of a couple who proposed simultaneously in front of Cinderella’s Castle. They both thought it would be the perfect spot. Proposals can either be an intimate and private affair or a grand gesture. The best option depends entirely on the two individuals in the relationship. It’s important to realize that popping the question isn’t only about the setting. The ring is also a critical component of the entire process.

In order to find the correct size for a girlfriend, men will normally ask a friend of hers or bring up her ring size in an unrelated conversation. However, there are some rich people like Dennis Brown who can buy multiple rings from which his girlfriend can choose. Dennis works as a fitness instructor and model. He decided to go all out financially for his proposal. He hired stylists, photographers, florists, event planners, and a jeweler. Dennis also got six different rings so that his girlfriend Atara could choose her favorite one.