The newest entry in the Fast and Furious franchise promises to bring back everything that we love about the series, but the new movie, simply titled F9, will also be adding something new as well. The biggest newest addition, quite literally, might be the inclusion of John Cena in the cast. Vin Diesel spent the upcoming film’s entire production te*sing us with what John Cena will bring to the movies, and now we have our first hint of what that will be because we now have our first look at the new character. The F9 Twitter account has dropped a series of character posters for the new movie, and while most of them are dedicated to the actors we know, like Vin Diesel, Michelle Rodriguez, and Ludacris, the final one is of John Cena, so now we know at least what he’ll look like when the trailer drops on Friday. 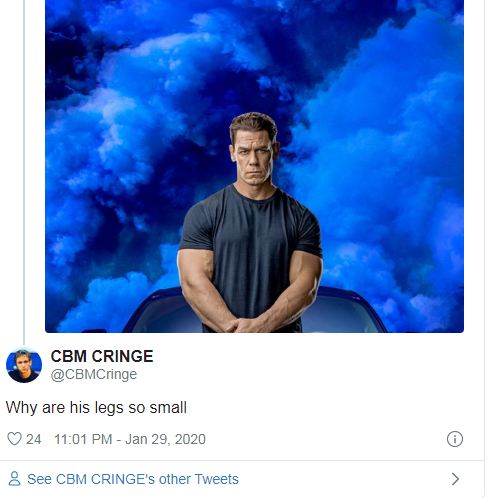 It has to be said, this poster looks like it’s a CGI creation rather than an actual photo of John Cena, but I’m sure the image comes from something official, so this is still a real look at Cena’s character.  The poster doesn’t give us any other information, so we still don’t have a name for this character.

We have a hairstyle though, which I suppose is something. It’s not the standard John Cena crew cut. Beyond that, the image pretty much gives us John Cena we were likely expecting.He looks massive and menacing.

I swear to god if @TheRock is not in this pic.twitter.com/SOXJ2kiEQj

That’s been John Cena’s standard role in most movies of late, and it’s certainly a role he fits well.  The poster’s existence probably also gives us another piece of information about the character. He’s likely one of the good guys.All the other posters that were just dropped are members of Dom!nic Torreto’s family.

There’s no poster for Charlize Theron’s Cipher, for example, who we know will be reprising her Fate of the Furious role. So, including Cena’s character with the rest of the heroes could be an indication that he’ll be one of them, though that’s speculation at this point, anything is still possible. 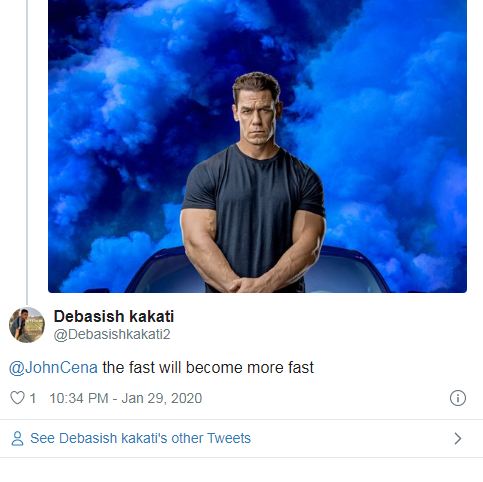 We’ll likely get a few more details when the first trailer for F9 arrives. The trailer will debut on Friday as part of a concert event in Miami. One assumes it will then make its way online, and will also be part of this weekend’s Super Bowl during one of the commercial br*aks.

While John Cena has been making a name for himself and has had a solid career in Hollywood, he seems to be in the midst of a major transition into a much bigger movie star. He previously co-starred in Bumblebee, the latest entry in the Transformers franchise, and he’ll follow up his F9 role as a member of James Gunn’s Su!cide Squad next year. 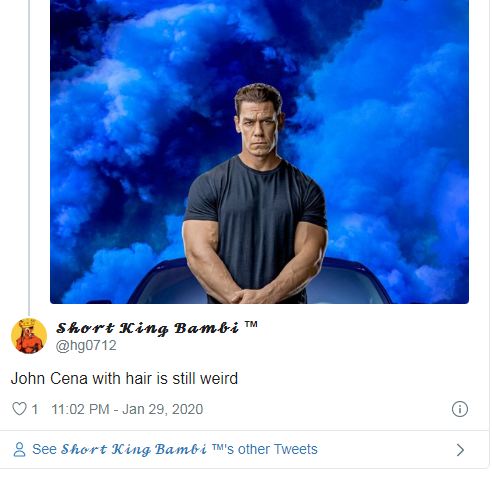 This Article First Published On CINEMABLEND